Return to our work

The Next 150 Years: Envisioning Just Transformations

Timnick Chair in the Humanities at Michigan State University, Kyle Powys Whyte spoke about the connection between indigenous rights and climate change. Reflecting on his own heritage, Whyte noted that his Anishinaabe ancestors were forcibly relocated from the Great Lakes Region to Oklahoma, United States in the 19th century. This is consistent with the long-standing history of Indigenous populations being moved to areas that are more vulnerable to climate change. 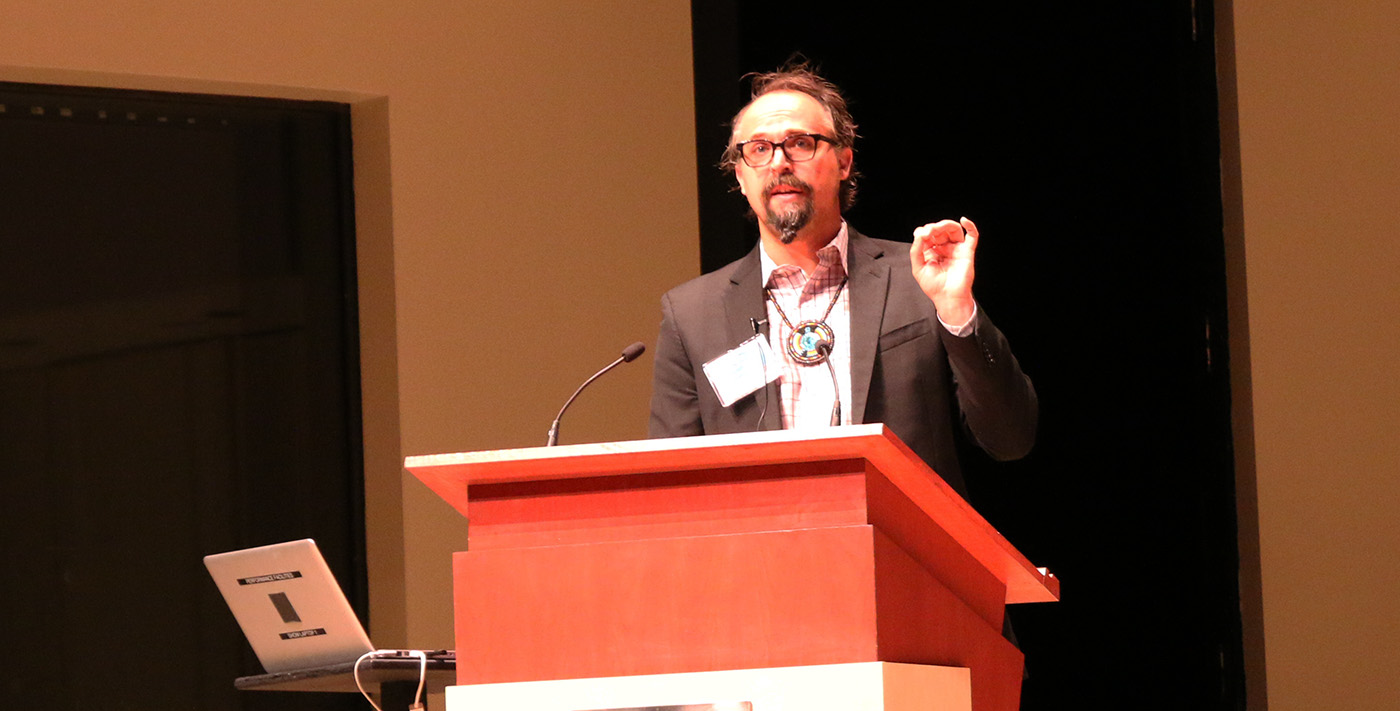 Whyte wants Indigenous communities to create self-sufficient renewable economies based on traditional Indigenous values. As Whyte went on to explain, there are a number of cases, like in Oklahoma, where Indigenous communities signed agreements with extractive industries to provide jobs for members of the community. Unfortunately, this dependency on the extractive industry has made the switch to renewable approaches challenging and has contributed to colonialism.

Whyte argued that new models of reciprocity between governments and indigenous communities could be developed if traditional Indigenous knowledge systems are respected and legitimated.

Imre Szeman, the Canada Research Chair in Cultural Studies at the University of Alberta, discussed modern Western society’s cultural dependence on energy use, what he calls a “petroculture”. A “petroculture” is one that accepts the need for energy consuming technologies as a given. As Szeman provocatively asks, what if, instead of talking about shifting from gas to electric cars, we questioned the need for cars in general?

The solution to climate change is often thought to be a technological one, but what Szeman wants us to think about is how cultural change might contribute to this change. By many measures, switching one energy technology for another won’t be enough which means that our use habits will likely need to change.

Szeman imagines the shift from a “petroculture” in two phases. First, we would see a reduction in energy use by shifting to locally controlled energy councils that collectively determine energy uses. Second, an “ecologization” of the energy economy by shifting the profit model to one that emphasizes ecological well-being.

As Executive Director of the Climate Action Network, Catherine Abreu had a lot to say about Canada’s current climate change context.

While Canada is only responsible for 2 percent of global emissions, it is one of the world’s top eight polluters – we produce double the amount of greenhouse gas emissions as the 145 least emitting countries.

The fact that Canada is involved in international agreements, such as the Paris Climate Accord, is a positive step. However more concrete action and commitment is needed.

There are five main challenges to achieving emissions reduction objectives as Abreu sees it:

Julia Langer, CEO of The Atmospheric Fund, presented on the City of Toronto’s progress toward its emissions reduction goals.

So far Toronto has hit its 2012 Kyoto Protocol target and is on track to meet its 2020 goal. However, if current trends continue Toronto will not meet its 2050 goal.

As Langer sees it, if Toronto can achieve success in three main areas, it can shift the trend and meet its 2050 goal. This is why TransformTO is campaigning for the following:

Scoping Corporate Climate Change Risks for the Region of Peel

The OCC Secretariat is providing additional staff capacity and climate change expertise to the Region of Peel as they scope corporate climate change risks in support of their climate change master planning process. Context: The Office of Climate Change and Energy Management (OCCEM) has been…