Return to our work

Session 1B: Climate Law and Justice

Estrin’s main takeaway was that these examples demonstrate a lot of potential for future climate change litigation. Claims on the grounds of human rights and constitutionality could be an important strategy going forward.

Echoing many of the same sentiments as Estrin, Kristin Casper of Greenpeace emphasized the importance of scrutinizing the political influence high carbon-emitting corporations such as oil and gas have on the democratic process. Casper highlights three recent court cases as examples of positive climate change litigation:

Once again echoing Estrin, Casper argued that scientific facts on climate change are the key to winning these types of cases.

Nathalie Chalifour, law professor from the University of Ottawa, presented on the Canadian Charter of Rights and Freedoms and how it might apply to climate change cases.

Specifically Chalifour has been focusing her research on sections 7, which guarantees the right to life, liberty, and security of the person, and 15(1) which states that every individual is equal before and under the law and has the right to equal protection and benefit.

As Chalifour argued, government inaction on climate change seems to plausibly violate both these sections in a variety of ways. Chalifour’s talk was based on two papers she was working on at the time of presentation.

The FSB was established to help member nations of the G20 create stable financial conditions. Through its recent task force, the FSB has been analyzing long-term financial risks posed by climate change. Such risks include property, political stability, and food and water security.

Since financial market analysis tends to focus on short-term risk to investors, the FSB has been attempting to create a system that can represent climate change related risk to investors. This all depends on creating standardized obligations for companies to disclose climate-related financial information.

As Williams pointed out, this is one of the few market-oriented attempts to solve the risks associated with climate change.

Keith Stewart from Greenpeace Canada closed out the panel by discussing the need for corporate climate disclosures.

Since long-term costs associated with climate change are not being adequately represented, Stewart argued for the establishment of a strong legal framework.

According to Stewart, a good framework would be 1) mandatory for all companies; 2) be science-based; and 3) be enforceable so that non compliant companies would be appropriately penalized. Establishing such a framework could form the basis for future lawsuits.

Session 2B: Climate Justice and the Commons

The second panel in the climate justice workstream focused on the impact of climate change on marginalized communities.

The first panelist was Anishinaabe climate activist Vanessa Gray. Gray grew up in Aamjiwnaang, a community in close proximity to the chemical plants near Sarnia, Ontario, known colloquially as the “chemical valley”.

Gray recounted memories of her community developing illnesses as a result of chemical exposure. A troubling statistic shows that the miscarriage rate in Aamjiwnaang is 39 percent compared to the national rate of 15 percent.

Gray’s main message was a rallying cry for indigenous communities to mobilize against environmental colonialism and to reconnect with cultural traditions.

Cheryl Teelucksingh from Ryerson University spoke about racism and environmentalism.

Teelucksingh began by talking about how environmental injustice is often linked to racism, and cited examples such as Standing Rock. Environmental racism has a long history of displacement and marginalization.

Lucy Cummings, Executive Director of Faith and the Common Good, presented on an emerging alliance of faith groups that share a commitment to protecting the environment.

As Cummings argued, climate change is a moral issue that should concern members of many different faiths.  Since the group’s formation, alliances on a number of climate related issues have formed between many faith groups, including various Christian and Muslim groups.

One of the advantages associated with faith groups are their ties to grassroots communities, meaning actions have the potential to be more locally oriented.

The panel concluded with Paul Baines from Great Lakes Commons, an organization dedicated to protecting the environmental health of the Great Lakes.

Baines is critical of the large and very fragmented governance structure of the Great Lakes. As the Lakes cross many jurisdictions (federal, state, provincial etc.), coordinated policy becomes almost impossible.

Baines argues for a new model that would treat the Lakes as a commons, where all jurisdictions must conform to certain standards of treatment and respect.

Session 3B: Gender Diversity in the Low Carbon Economy

The final panel on climate justice took up the issue of gender in the low carbon economy. Chaired by York University Professor Christina Hoicka, this panel presented the research of four thought leaders in the energy field and their experiences as female academics in the energy space. 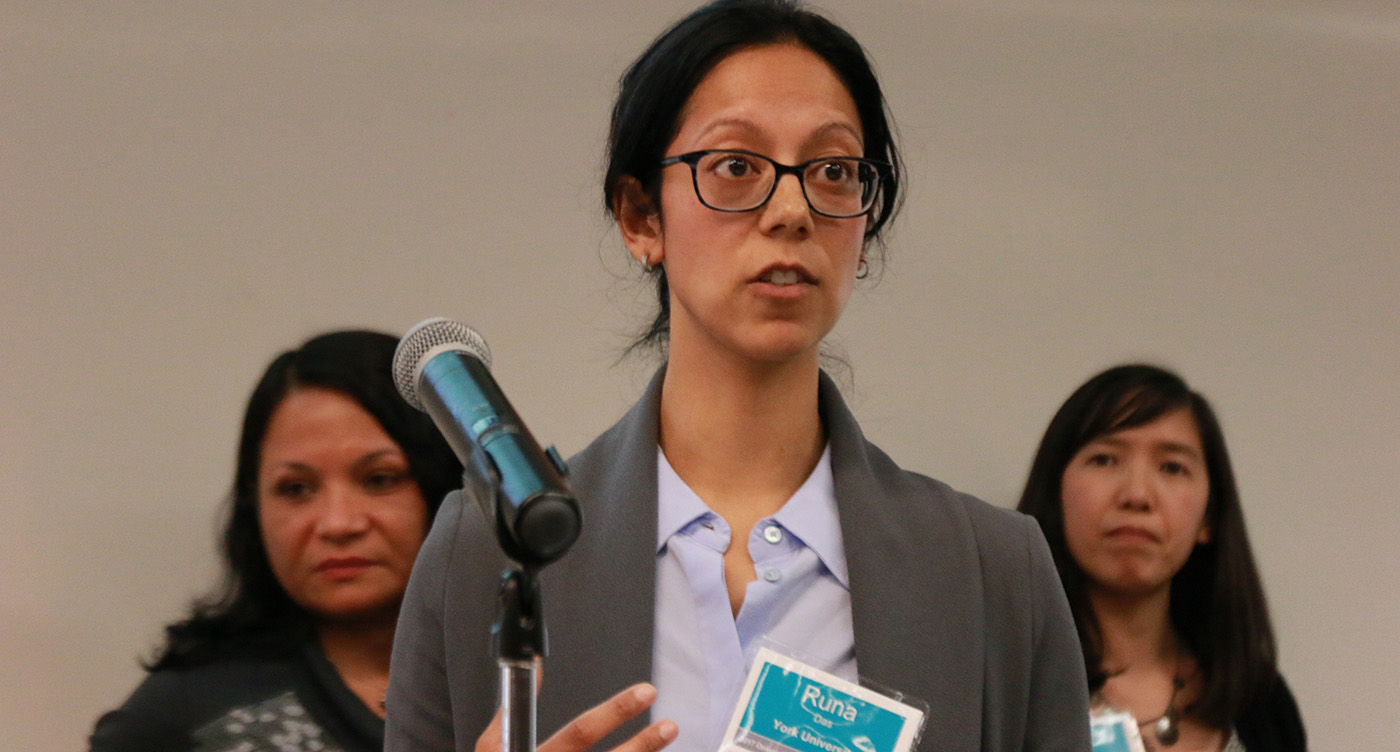 Discussions touched on gender equity in the renewable energy industry in developing countries, energy literacy, approaches to energy conservation, and the democratic advantages of community energy.

Bipasha Baruah is one of the cofounders of Women in Renewable Energy, an organization focused on employment equity in the renewable energy space.

Baruah’s research has showed that gender equity in the renewable space is often better in developing countries (like India and Brazil) than it is in developed ones. Reasons for this include the prevalence of systematic devaluation of women in technical occupations, even with higher education qualifications. Baruah and her organization are working on programs to correct this gap.

Runa Das from Ryerson University spoke about the importance of energy literacy.

Since energy is directly tied to climate change, and is something that we rely on everyday, it’s something we should all understand. According to Das, an energy literate individual will value the impact of energy on the environment and society, and will engage in related behaviors and decision-making.

Das’ current project has been engaging practitioners and educators in the development process of an energy measurement tool that can help contribute to energy literacy.

Ma discussed different strategies for reducing per unit cost of energy including peak shaving, off-peak reduction, peak shifting, and time-independent conservation. The model would be especially useful for price sensitive consumers, including those in disadvantaged communities.

The panel concluded with Julie MacArthur from the University of Auckland discussing community energy strategies.

Developing new energy systems can be a very contested process caused by the conflicting interests of several stakeholders. Community energy is a more democratic approach that includes the community in the decision-making process.

MacArthur argues that if people participate in the process there is greater likelihood of the right kinds of projects proceeding. Currently there are several community organizations working towards some kind of community energy framework.

Session 1A: Community Energy Planning KEY TAKEAWAYS Empowering local communities to take action on climate change can succeed in ways not possible if decision-making is concentrated at the provincial and federal levels. More tools are needed to empower community energy planning.   OVERVIEW The panel…